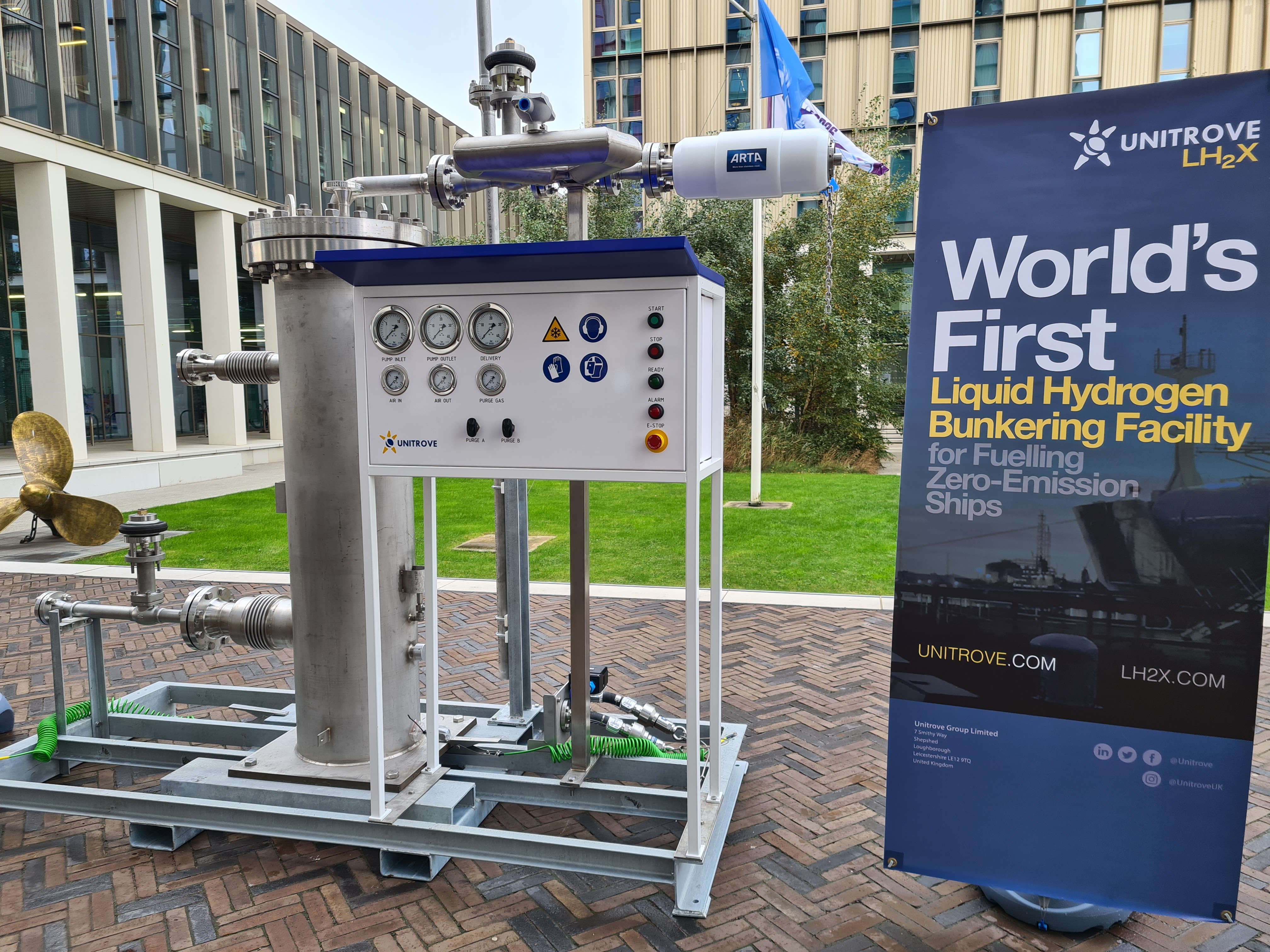 LOUGHBOROUGH, England (April 13, 2022) — The creator of the world’s first liquid hydrogen bunkering facility for fuelling zero-emission ships has won a UK Government grant to develop a unit ready for rapid deployment to ports around the world.

Steven Lua, CEO of Unitrove Innovation, part of the Unitrove Group, said the £30,000 Transport Research and Innovation Grant (TRIG), awarded by the Department for Transport in partnership with Connected Places Catapult, would be used to help further develop its commercial version of the small-scale portable facility, which can help reduce emissions of one of the most polluting forms of transport.

The Leicestershire-based clean-tech company unveiled the unit at COP26 in Glasgow last November.

Steven said the facility was vital to fuel an international shipping industry that accounts for around one billion tonnes of global carbon dioxide (CO₂) emissions and contributes to around 400,000 premature deaths and 14 million cases of childhood asthma every year due to fine particulate matter (PM2.5), sulphur oxides (SOₓ), and nitrogen oxides (NOₓ) that arise from ship smokestacks*.

“The award will help us to further develop our liquid hydrogen bunkering facility as we move towards commercialisation,” said Steven. “This is fantastic validation for our project and it also opens up opportunities for increased collaboration as we work towards reducing emissions, which are causing so much damage to our planet.

“We need collaboration across the entire energy industry as there is no one-size-fits-all solution. We need to embrace multiple renewable and clean energy solutions to achieve our net-zero ambitions and we need real investment in infrastructure to develop affordable, reliable, sustainable energy in the future.”

The TRIG programme was launched by the Department for Transport in 2014 to foster research and innovation in the sector. This year’s TRIG is the largest ever, with over 50 awards spanning different areas including maritime decarbonisation and the future of freight.

Steven said liquid hydrogen as a commercial fuel was relatively unexplored as an option – but that it had great potential for many uses, including plugging the gap that electric and compressed hydrogen cannot fill.

"Liquid hydrogen has long been used to safely and successfully send rockets into space. The technology is mature, but the markets for its use are not.

"We already see very early signs of light-duty vessels being battery-driven or powered by compressed gaseous hydrogen, but liquid hydrogen will allow us to serve the heavier portion of the shipping fleet where we hope to have a much larger impact.

“We are also exploring options including ammonia, liquid organic hydrogen carriers, and solid hydrogen in the form of sodium borohydride. However, we understand that priority is currently being given to the development of international standards and regulations for pure hydrogen, and this could play a significant factor in the long run.

“We believe that hydrogen will be recognised as a global commodity that will be traded in the same way that natural gas is today. The bunker fuel market is worth an estimated $120bn, so there is a huge opportunity not only in environmental and social terms, but also financially.”

Transport Minister Trudy Harrison said: “Innovation funded as part of TRIG could be the key to unlocking a more efficient and safer transport system for tomorrow.

“I support the ingenious ideas of this year’s cohort every step of the way and wish the successful applicants all the very best. I look forward to seeing the ideas develop to boost our green agenda and create high-skilled jobs across the UK.”